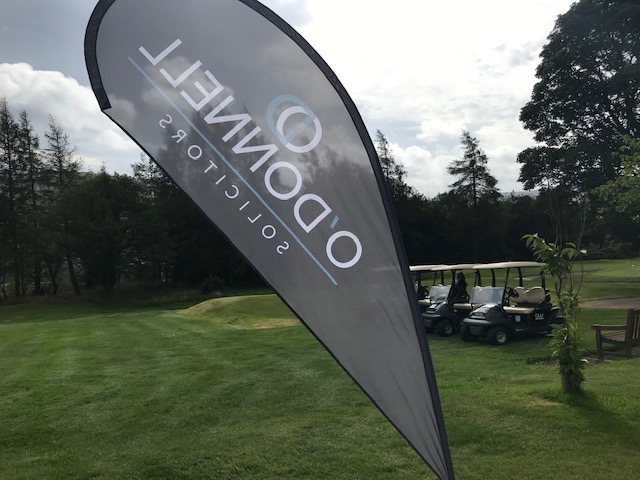 Inaugural Charity Golf Day Scores a Hole in One for Emmaus

On Friday 30th August O’Donnell Solicitors held its inaugural Charity Golf Day at Saddleworth Golf Club.  Joined by staff, clients and professional connections, the day was a resounding success, with over £700.00 raised for our charity of the year, Emmaus Mossley.

With a busy afternoon of golf ahead, players were greeted on arrival at the club with lunch provided by Old Smokey BBQ.  Fuelled with some fantastic food, the 56 players taking part in the day – making up 14 teams of 4 – were ready to kick start the afternoon’s competition. Teams included clients, friends and local connections – and we were even joined by Manchester United legend Paul Scholes!

A shot gun start commenced at 1.30 pm with players marking the best two scores on each hold in a stableford competition. In addition, golf professional Ady Wheatcroft, Director of Golf for ACE Golf Challenge, was in attendance to host a £1,000.00 hole in one and beat the pro challenge which was videoed live from the 15th Tee. Refreshments were provided at several points on the course by Trish Schofield and Aimee Jo-Cole and were well received by the players.

After a thoroughly enjoyable afternoon’s competition, during which the weather largely stayed dry, prizes were awarded to the first, second and third teams. O’Donnell Solicitors’ team comprising James O’Donnell, Manus O’Donnell, Chris Atkinson and Liam Pattison took the glory with a fantastic score of 90 points. Second place was awarded to a team from Housing Units, with Durr Furniture taking the third prize spot. Prizes for Nearest the Pin and Longest Drive were also awarded.

The day concluded with a fantastic evening meal in the club house, followed by an entertaining set by comedian Lea Roberts.

“Having attended many golf days myself, I was keen to try and put our own spin on things and make the event an enjoyable experience for all the players taking part. I’m delighted to say that we achieved this goal – although the day’s success can largely be attributed to the guests who came out in such fantastic spirits to participate. From first announcing the date of the event to getting the teams on board, we have received fantastic support from our clients and contacts, for which we are very grateful.

“Of course the main purpose of the day was to raise funds for Emmaus in Mossley – so we’re thrilled to have made over £715.00 This amount will be added to our overall fundraising target for the year – which currently stands at over £1500.00.

“Thank you to all involved and we hope to see you at next year’s event!”